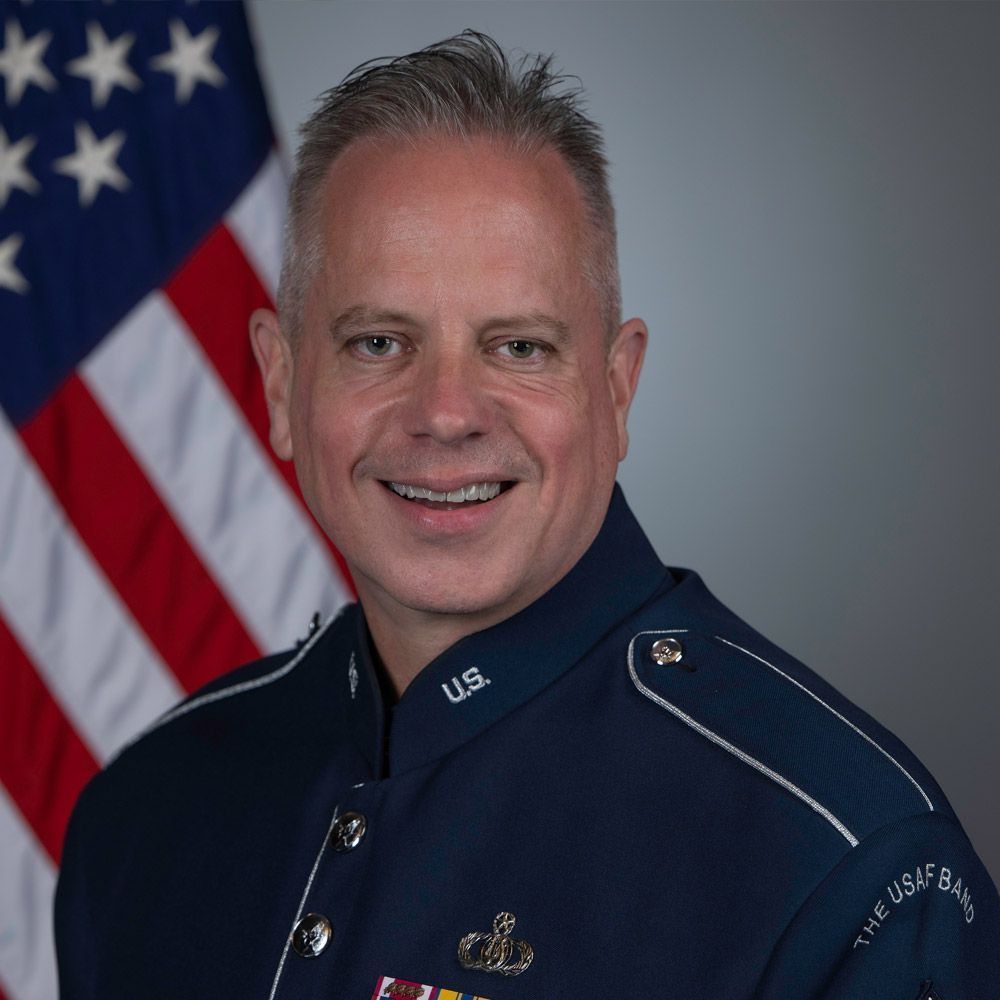 Chief Burns was born in Fort Worth, Texas, and grew up in Cleveland, Tennessee. He enlisted in the Air Force in November 1993. His first assignment was with the U.S.Air Force Band of the West, Lackland AFB, Texas. As a Senior Airman, he was appointed music director of the newly formed jazz ensemble NightHawk. In 1996, he won a position with the U.S. Air Force Academy Band, Colorado Springs,Colorado, as lead trumpet with the Falconaires jazz ensemble, touring nationally and heading the graphics design team. Additionally, he built and managed the unit’s first dot com website. In 2002, he won a position with The U.S. Air Force Band as split lead trumpet with the premier jazz ensemble of the Air Force, the Airmen ofNote. From 2017-2020 Burns led the Airmen of Note as flight chief.

His role as chief of Marketing and Outreach also began in 2017 and includes oversight and approval authority for the advertising, social media, website, media outreach, graphic design, unit historian, and photography teams. A creative content developer, Burns was responsible for initiating and building the entire social media landscape for The U.S. Air Force Band beginning in 2008-2009, resulting in targeted & trackable engagement worldwide that inspires millions. As an expert photographer, Burns has taken some of the most memorable images for The U.S. Air Force Band, including winning a top 20 photo for the entire Air Force in 2012.

Chief Burns began music exposure began at a very early age thanks to his musical family. His formal secondary music studies began at Lee University in Cleveland, Tennessee. He finished at Oral Roberts University in Tulsa, Oklahoma, where he completed a Bachelor of Music degree in performance and a Master of Business Administration degree.

Before entering the Air Force, Chief Burns played lead trumpet with the nationally televised “Richard Roberts Live” and “Expect A Miracle” television shows in Tulsa, Oklahoma. He also was a featured soloist with the San Antonio Symphony, the Oklahoma Symphonia/Tulsa Pops, the Tulsa Ballet, the Bartlesville Symphony, Ms. Oklahoma Pageant Orchestra, and worked extensively with various big bands and jazz combos. Prior to moving to Oklahoma, Chief Burns was the lead trumpeter for the 1985Tennessee All-State Jazz Band, toured the entire continental U.S. with “The Spurrlows” from Florida, and toured Europe and theEastern U.S. with various music groups while attending Lee University. Chief Burns has performed with an extensive lineup of notable artists and has arranged and played on hundreds of recording sessions, including projects for Disneyland, Disney andNorwegian Cruise Lines, Disney Tokyo, Alfred Music, ESPN, and ABC Sports.