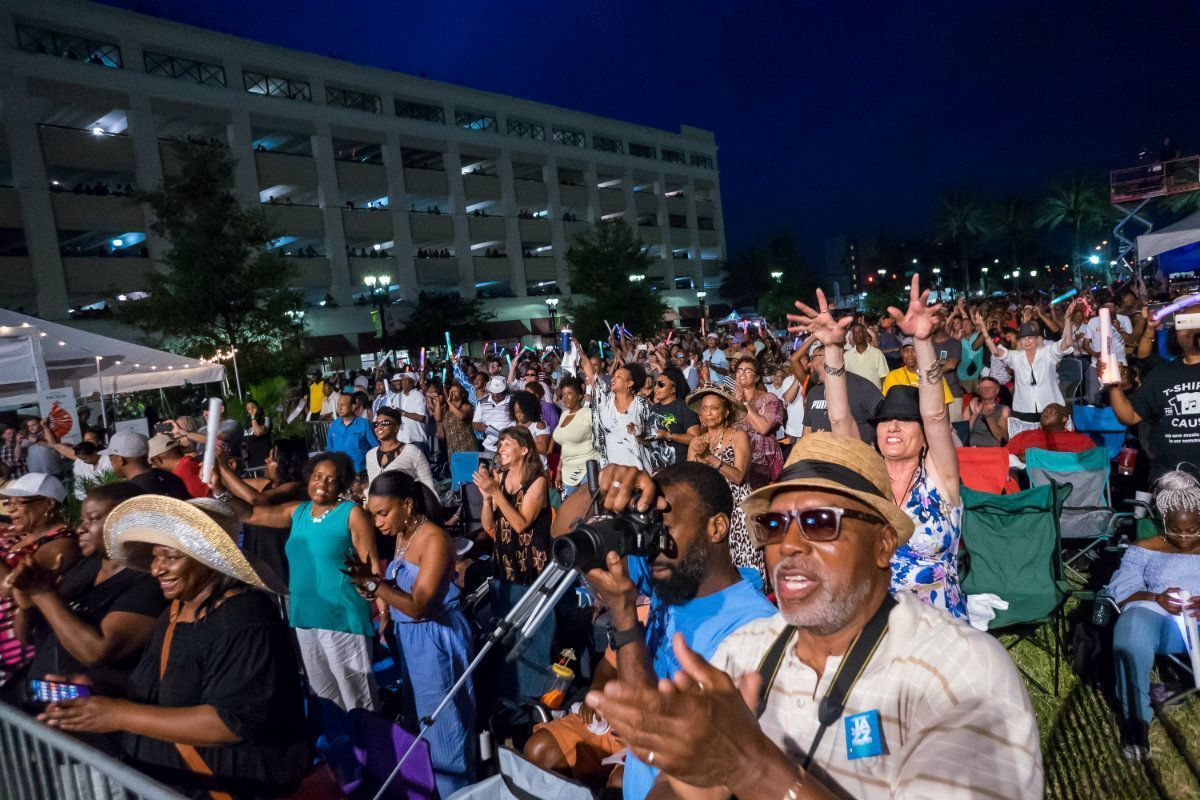 Special Events Manager Brent Fine says this year’s lineup includes a number of young artists that he hopes will encourage new patrons to visit the Jacksonville Jazz Festival. “We look to have the biggest diversity with our artists year after year,” he says. “That includes bringing in your traditional jazz artists and local artists. We look at giving everyone a little bit of something.”

Fine aims to target fans who come out early and stake out a spot to see a specific artist and discover a performer they’d never heard before. He also hopes that incorporating up and coming talent like Moonchild, Jamison Ross or Jazmin Ghent will reach younger audiences who may appreciate the fresh approach to traditional jazz elements.

“We want to introduce people to new acts and artists all the time. That’s what a festival of this nature is really geared toward, It’s definitely intentional. We’ve looked at what our audience profile looks like and how do we diversify that. We’re bringing in a good amount of younger fans, the 40-and-under, but they still only make up about 15 percent of our audience,” says Fine. “There are so many good acts this year across the board. It’s still the Jacksonville Jazz Festival but it goes into so many different genres with a little bit of R&B and a little bit of soul. That’s what jazz is all about.”

The logistics of mounting a festival in an area with ever-changing growth is tricky but Fine says the city’s Special Events team works diligently to align the festival footprint with the changing environment.

Among the most significant changes is the decision to reduce the number of stages from three to two to help limit the impact on vehicular traffic. The Main Street corridor will remain open to help improve the flow of traffic downtown and allow merchants and residents to navigate the area easier than in previous years.

“It’s very difficult closing so many roads in a vibrant Downtown where people are trying to access their homes and businesses. By reducing to two stages, we are able to keep Main Street open which is the main thoroughfare coming from the north to the south of Downtown. We were losing that north to south corridor and it was causing some traffic congestion during normal business hours. We’ve changed our footprint just a little bit in order to accommodate the growth and development that is going on,” says Finer.

“The festival really does morph with Downtown and that was a really big part of what we did last year with moving to the courthouse lawn to give us more space and utilize some of the development that was going on down there. It’s a grassy space which is awesome to have when you’re coming out and bringing out your lawn chair. There are a number of more parking facilities in that area with the parking garage right on Forsyth and the Water Street garage right off Bay Street. There’s a lot of spaces for people to park and access the festival footprint.”

Finer says the decision was made last year to divert the festival traffic away from the Jacksonville Landing which was the traditional location of the Breezin’ Stage. The closing of the Landing is not expected to impact the festival.

“We didn’t have a stage at the Landing last year even though the Landing was still open and operating. We pulled out to give us more space and revenue opportunities within the festival footprint and kind of condense things between the Main Street stage, Hemming Park and the courthouse. The stage that won’t be returning this year is the one that was right there on Main Street to keep that corridor open.”

The rising number of residential properties will impact attendance but Fine says the team was unable to collect accurate data last year as the arrival of Tropical Storm Alberto in the panhandle created less than desirable conditions. He hopes this year’s festival creates a more precise snapshot of the number of attendees enjoying the festival who also live in the area.

“This is going to be the first year that we will have that little bit of increase and that’s only going to continue over the next couple of years. We’ve always had the staples such as The Carling but now we have a lot more residential development coming in especially toward the LaVilla area and I think that is only going to help us out as we continue over the next couple of years. I think this year is going to be a pretty big measure of how our attendance looks year after year.”

Tradition is central to jazz and despite all the changes, the Jacksonville Jazz Festival is proud to uphold a number of traditions that are considered signature events. The Jazz Piano Competition held at the historic Florida Theatre serves as an unofficial opening ceremony with participants vying for the opportunity to perform Saturday morning on the main stage.

“It really opens up the festival because it is held on Thursday night. So many people have come across that stage,” says Finer. “Also during the festival, we induct a new individual into the Jacksonville Jazz Festival Hall of Fame. There’s a lot of history and tradition with that opening event. It’s not quite an opening ceremony but a lot of people definitely view it as one.”

The Jazz Marketplace, formerly known as the Arts Markets, has expanded to include goods and wares. Finer says adding new elements reaches a broader cross-section of festival attendees.

“We put a heavier focus on it year after year because so many people enjoy coming to the festival for the music but they also enjoy coming for the experience. A lot of festivals are transitioning to the model of not just having the stage and the talent. It’s the overall experience the food, drink, and shopping experience and the Jazz Marketplace element just expounds on that by offering a little bit of something for everyone to so when they come downtown.”

Food, drinks and vendors lend to the unique spirit of the event but the heart of the Jacksonville Jazz Festival has always been the music. From the early years with such immensely talented artists as Dizzy Gillespie and Miles Davis and The Commodores, presenting such an icon as Gladys Knight is a testament to the city’s commitment to the entertainment experience.

“We’re excited about Gladys. Arguably it could be one of the bigger acts we’ve had on stage at the festival. We attribute that to our production and stages that allow us to bring in even bigger talent and the city’s commitment to the festival to make it happen in Jacksonville every year. This is year 39 for the festival if we include those two years when the festival was in sort of a transition phase. Going into year 40, it’s one of the longest running events here in the city. It’s also nationally and arguably internationally known,” notes Fine.

“According to our survey data, about 30 percent of our audience comes from outside Duval County. It’s an economic generator. Hotels are filled. We did an economic impact study last year and it was a $9.8 million economic impact and that was the year we had a tropical storm rolling through the Panhandle so we’re going to get a better figure on that this year, hopefully with better weather. Its an economic impact driver, it’s a quality of life driver, people who live, work and play in Jacksonville get to experience music and culture at absolutely no cost and that has a lot to do with how people love their city. Not many cities have festivals that are run and produced by the city and we are very fortunate.”